The Power of Thought and Following Up

Asalamalaikum (Peace be upon you)!

Thanks for making it over to my page and reading my experiences in Morocco. If you have not already watched my pre-departure video (click the link to watch the pre-departure video), please watch it now. This is will give you vital background information needed to understand my presence in Fes, Morocco.

Moroccan flag – These pictures are taken from the internet. Please visit my Instagram page to see my photos and stories.

As a premedical undergraduate student, my trip to study and intern abroad at the Centre Hopitalier Universitaire (CHU) Hassan II (the main Hospital with latest equipment and advance research facilities in the city of Fes) is one I had not envisioned when I started college. When I was a rising sophomore, I heard of students going to Morocco to do research in botany and other life sciences, intern at a hospital where they would gain clinical exposure, and study Arabic. These activities (organized by my Biology/Neuroscience Professor, Dr. Abdeslem El-Idrissi), along with the locations where they were being held grabbed my immediate attention. The idea of going to Morocco grew stronger and stronger, especially since I am a Muslim and I have a strong cultural and spiritual connections to Morocco.

However, I did not know how I will fund my time abroad. With the guidance, help/support from fellow peers, classmates, professors, advisors, and  Fund for Education Abroad (FEA), I am here today! Sometimes I wonder how I got here. I like to look back, reflect, think, and be grateful. If it were not for my vision, yearning of my heart, efforts to seek out help to make this opportunity into a reality, and willingness of others to help me in my mission, I would not be here in Fes, Morocco today.

I arrived at King Muhammad V airport on July 11th, a Thursday morning. Dr. El-Idrissi did a magnificent job organizing all the logistics. We had a chauffeur pick us up from the airport who also gave us a tour of Casablanca (we visited Grand Hassan II mosque where a total of 105,000 congregants can pray together at once). The mosque was built in request of Morocco’s late king, King Hassan II.  He stated in a speech in 1980 that he wanted to build this grand Mosque on water as God’s throne is resting on water (mentioned in the Quran).

The majestic Mosque was constructed and opened to the public in 1993 and is considered Morocco’s most ambitious architectural work. It is the largest Mosque in Africa and the fifth largest in the world! I had the great fortune to say my afternoon prayers in the grand mosque. We ended our short tour of Casablanca by visiting Rick’s cafe where we took some photos and left. The cafe is an imitation of the famous bar in the classic film Casablanca. If you plan to visit Casablanca and wish to see Rick’s cafe, make sure you make a reservation! They do not take walk-ins. Hence, we could not go inside. Above is the Hassan II Mosque, Casablanca

We finally arrived in Fes, Morocco that same day. It was about a 4 hour drive from Casablanca – I slept through the entire car ride because I did not sleep on the flight to Morocco as I was busy making wonderful conversations with my inflight neighbors and flight attendants. Although I stayed in Casablanca for only a few hours, I found Fes to be very unique and different than Casablanca. I can feel it in the environment, in its people, and smell it in the air.

My mind is amazed at the differences and beauty of the various cities of Morocco. I did not expect a diverse population either! Fes is known to be one of the oldest /historic cities on Morocco and is also known to be the “city of saints.” There is an old Fes, a “new” Fes – which is not new but they call it new since it was built after the old- , and a modern Fes (which is where our apartment is). On Friday, July 12, we had orientation at the CHU hospital and was introduced to some of the staff that we will be working with. We will start our internship Monday and look forward to it very much.

The biggest and oldest tannery in Morocco located in the old Fes. If you purchase anything, do not forget to bargain!

We visited Old Fes (founded by Moulay Idriss II) on Saturday, July 13th. The Father of Moulay Idriss II (Moulay Idriss I) is believed to be the first person to bring the faith of Islam to the Berber people of Morocco and his lineage goes back to Prophet Muhammad (Peace and Blessings be Upon him).

He constructed the oldest Moroccan city and founded one of the longest Moroccan dynasties. Be sure to have a tour guide when you visit the Old Fes. If we did not have a tour guide, we would probably be lost for a very long time. There are about 10,000 alleys there! You can find various shops selling anything and everything you could possibly imagine. Shop owners love to bargain there. Make sure you bargain. Without a bargain, there is no good sale.

The oldest and the first universities (some consider it the first ever and it was founded before Oxford!) in the world is also founded in the Old Fes. It is called University of Karueein (Pronounced “Qara-we-yeen”). It is also founded by a woman named Fatima Al-Fihriyyah. This university makes me proud and happy that it challenges the negative biases and stereotypes of Muslim women not being able to receive an education. In fact, they establish such lofty contributions to the human civilization.

We visited the fallen Roman city called Volubilis (the city of flowers) or Walili in Berber. The city’s excavation began in 1915, post World War I. Many German prisoners were brought to Volubilis by the French to start the excavation and till today, archeologists come here to continue their work. We followed this trip by visiting Meknes, the most fortified city in Morocco.

Again, there was an Old Meknes, a New Meknes, and the Imperial City (the city of Moulay Ismail – the Sultan of Morocco from 1672–1727 and second ruler of the Alaouite dynasty). According to our tour guide, many Moroccans are not fond of Sultan Ismail. He was paranoid that someone will assassinate him; therefore, he fortified the city. He also had 4 wives and 500 mistresses. In his castle were many stables that held over 1,000 Arabian, Berber, and mixed Horses. 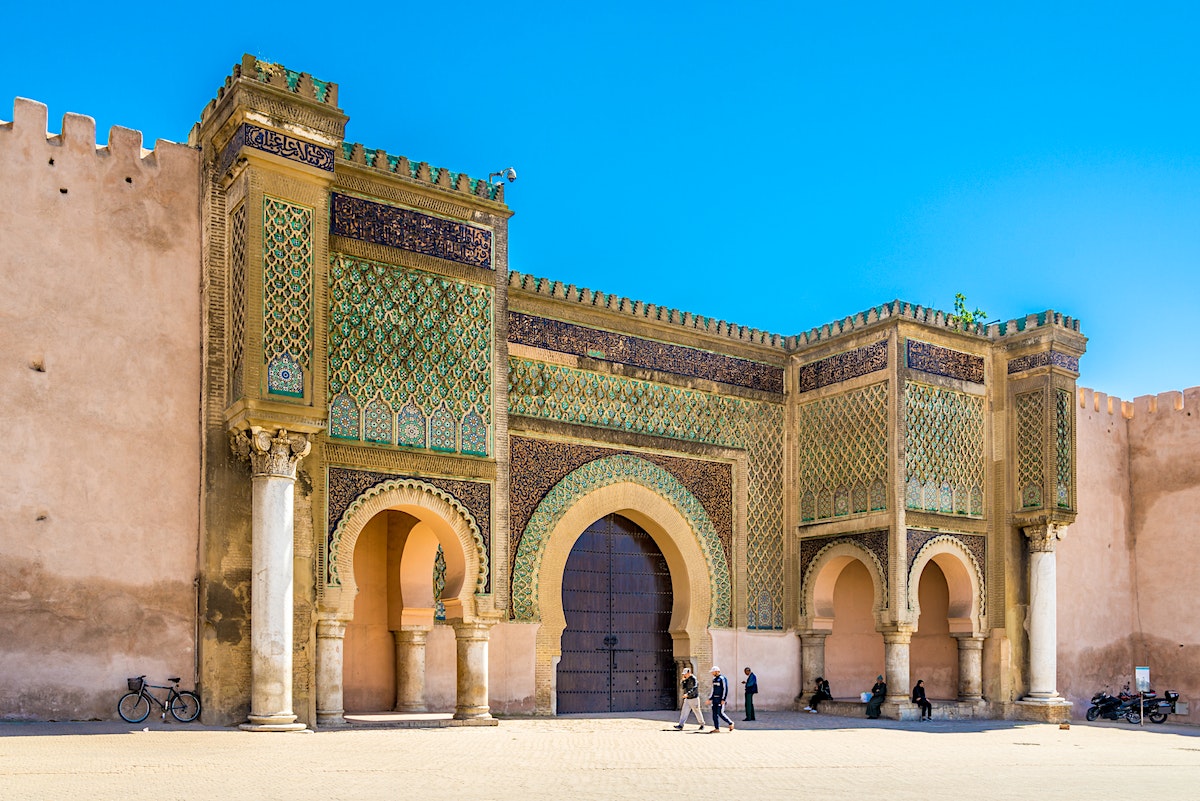 One of the many gates to enter the fortified city of Meknes.

It has only been 5 days and I already learned and witnessed so much! All this was possible when it all began with a deep thought about 3 years ago; I had a vision and yearning to come to Morocco to learn about its rich culture, language, and gain clinical experience at CHU. I followed that thought with hard work and seeking guidance from people who could point me in the right direction; stay true to your dreams. Work towards them.  And never stop dreaming. Speak them into being. Before you know it, you will be living your dreams and you will become the dream.

Our work week at the Hospital starts Monday (July 15th) and I will certainly be back to tell you more about it!